So I finally desided to try my sweater on today, and it fits perfect!
I started with this pattern, but I've already made some changes ;) I started the cables a few rounds earlier and I've knitted on sleeve in st st, not on k2, p2.
But I'm wondering about frogging the sleeve and knit it with the same cable as on the body.
What do you think??
My biggest worry is that I don't have enough yarn...

And I saw the most amazing coat on Ravelry today!
Here it is if your not on Ravelry.

Almost everything I have read lately have been fantasy novels. I'm totally in love with the genre! I do not have much time to read during the day, so I read when I put Endre to bed. I often stay in bed reading after he is asleep ;) If the book is good, it's hard to put it down. And above you see what's been my reading the last weeks - Tolkien. I love his books. Right now I'm reading Silmarillion and The children of Hurins are next.

So now when Erlend and Eirin are on vacation, I've watched all three Lord of the rings dvd :) And it looks like The Hobbit is going to be a movie too :) 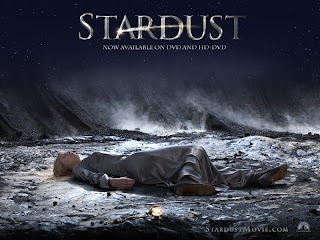 And if you haven't watched Stardust - you must. It's a romantic story. And I have yet another book on my to read list ;) Speaking of books to read, there is a norwegian fantasy novel coming in the fall. Song for Eirabu. I'm so looking forward to read it! Here is a little taste ;) English & norwegian.

Do you have a good fantasy novel you think I should read??
Lagt inn av Cloudberry kl. 3:56 PM 4 comments:

We went to the beach with Endre today and we had a great time! Hopefully we can get here next weekend together with the rest of the kids too, which are on vacation at their grandma. 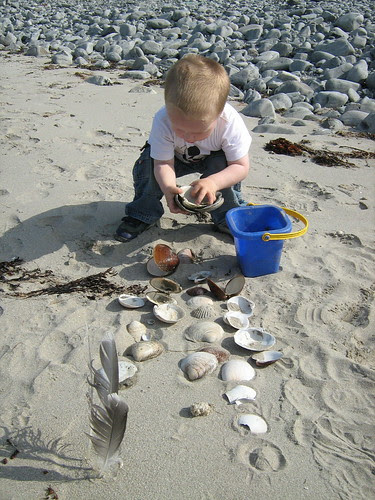 Endre is tired after a long day, so hubby are putting him to bed now. And I'm off to watch the third Lord of the rings dvd. More about that tomorrow ;)
Lagt inn av Cloudberry kl. 7:07 PM 5 comments:

We took our youngest son with us to the beach today. The other kids are on vacation with their grandma ;) We drove to Aglapsvik, a half hour drive from us. And we found this view towards Malangen.

To the south we see towards Vang and Laukvik.

To the north we see towards Bakkejord and Buvik. Further out is Brennsholmen and Sommarøy. I didn't know we had windmills in our area, so this one was a surprise.

The sea just got more and more ebb, so we found lots of seashells. 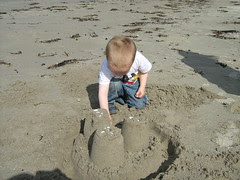 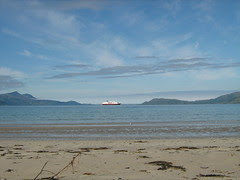 In the middle of the day we saw the northgoing hurtigrute on its way to Tromsø. 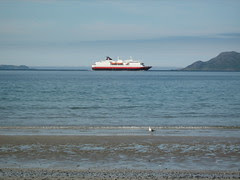 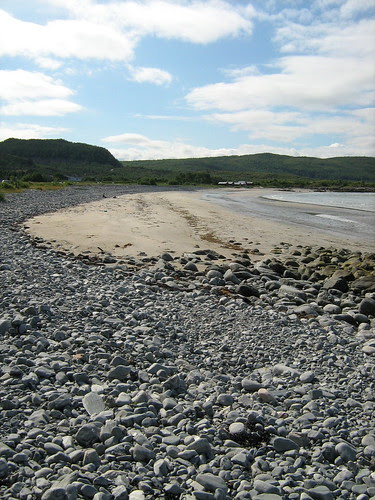 It's not warm enough for swimming yet, so we had the beach all by ourself. Only a couple of seagulls kept us company.

These "stars" was growing in clusters along the track down to the beach. I don't know their name.
Lagt inn av Cloudberry kl. 6:06 PM 1 comment:

By the lake and an award 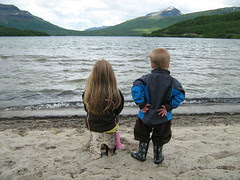 The kids and I have spent a couple of days in a cabin by the lake Skøvatnet. Erlend and Eirin are now on vacation at my mum, so it's just Endre here with us. So we have the nights by ourself without kids running up and down the stairs :) yesterday we watch Arn, so now I have to read the books... I need to know how it ends, can't wait untill the next film ;)

I had to have something small to knit on while being on the cabin, so I started on a pair of socks. I guess they will be a x-mas present.

And then Muffin has given me this award. Thank you so much. I'll give this award to 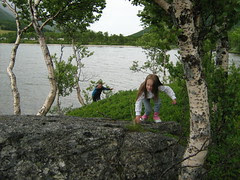 The kids and I have spent a couple of days together with mum and my sister at a cabin by the lake Skøvatnet. It rained the first day, but we walked a little around by the lake. 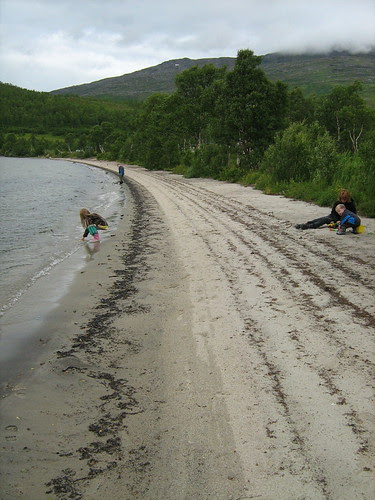 We headed to the beach the second day - and we had it all by ourself. It has not been many really warm days this summer, so the water is still very cold. So instead of bathing we made sandcastles and looked for treasures ;) 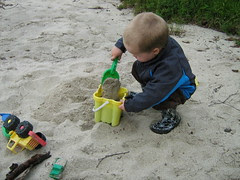 Along the edge of the beach there was a lot of harebells. 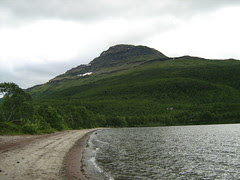 Some of the mountains around the lake. 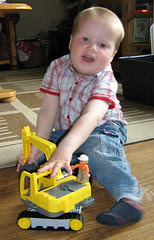 I can't belive how fast the years go by... It is three years ago since we brought Endre home.
Happy Birthday Endre! We love you so much! 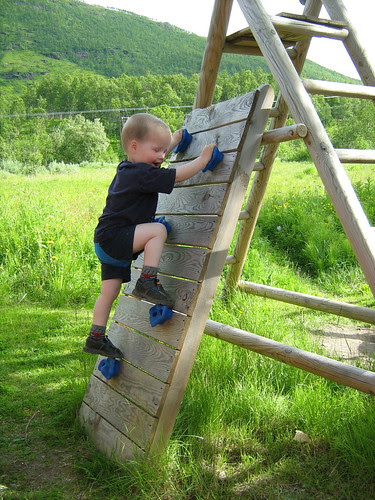 And I can remember our worries a year ago, but now he's up and all around as all other kids :) 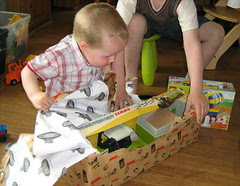 And he got what he wished for - lots of cars :) 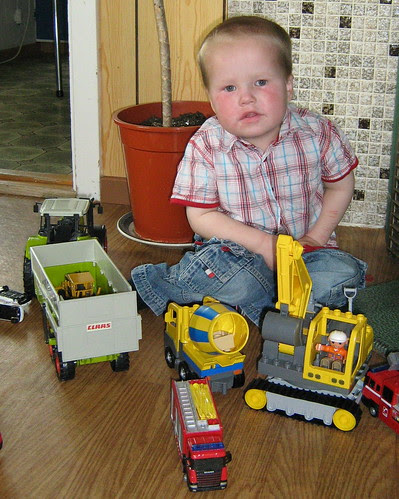 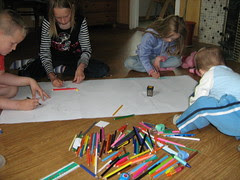 There has been so much going on in real life lately that I've not had time to post. I have had so many post in my head though... My stepdaughter has been here for three weeks so I've had my hands full... She is back with her mom now, and Eirin is having her last week in kindergarden this week. We have had mostly great weather with some rainydays in between. Those are the days when the kids gets quarrelsome, so I try to find something fun to do.
Above the kids are drawing on a picture together. I just drew some mountains and a lake for them. You can see more pictures here, here, here, here, here, here and here :o) 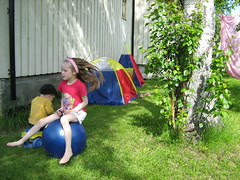 I got tagged by Heidelweiss a while back.
Ten things I can't get enough of! Lets see ;o)

I tag Monica and Cormz :o) 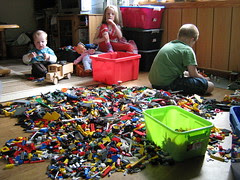 Yesterday did I spend 5 (yes five ) hours on my butt sorting the kids lego. They are having it in the livingroom now, so it needs to be in different boxes for easy access. Because there is no way thay are alloved to have the lego all over the floor like this every day... So now we have boxes for wheels and car parts, bionicle, plain lego, girly lego and all those people and accesories ( I had no idea there was so many monkeys...). And hopefully the kids are going to have it lie this for some times.

I really haven't been knitting much, but have made a pair of potholders. In simple singel crochet stitch. O do have a project on needle 7 mm that I hope to have done soon - if I have enough yarn...
Lagt inn av Cloudberry kl. 9:29 AM 11 comments:

I started knitting on her in April and she has just missed her eyes, ears and trunk. So today I finally got myself together and finished her. I'm not that pleased with her, I do think she remind me more of a mole (whitout the ears...) But beauty comes from the inside and Eirin loves her, so I'm not going to change her in any way. I did knit the trunk a couple of times though.

I droped the flowerchain around her head, the bow on the back of her skirt and the flower she should hold in her trunk. Eirin didn't want the flowers and I'm just happy to have less small thing to knit and assemble ;) The eyes are two buttons. I tried to sew the eyes with chain stitch.... But that's not something I'm good at.

Pattern: Little Blossom by Alan Dart from Iresistible Gifts to Knit (Ravel it)
Yarn: Sara pelsgarn for the body, Karisma for the skirt and Mor Aase for the knickers.
Needles: 3 mm 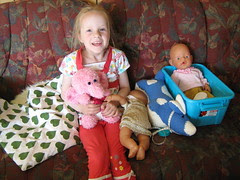 She really is loved and got in the play with the others after the photos where taken ;)
Lagt inn av Cloudberry kl. 3:03 PM 12 comments: 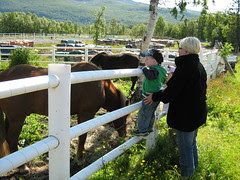 We have had a great week. The sun's been shining even though there has not been as warm as we have wanted. So I haven't felt very crafty the last days. I have some projects laying around, but I just haven't felt like knitting... Hopefully my "mojo" will come back soon ;)

Anyway, yesterday we went on an open farm to watch farm animals. Here is Endre and Eirin looking at some of the horses with grandma.

There was hens and cocks, and one some of them was wandering among us. 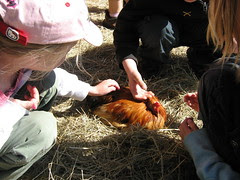 And of course there was sheeps there. This is Spælsau - it is adopted for the climate and was a domestic animal from the iron age. They are outdoors most of the year. 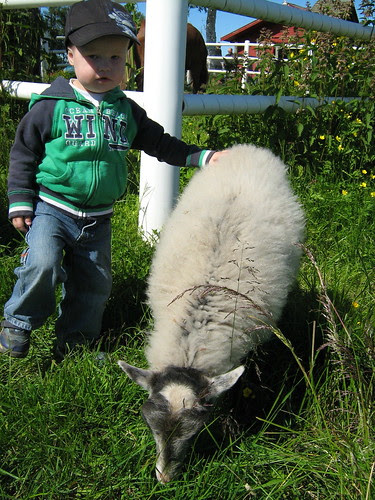 This lamb was very tame. And so soft to touch. Endre followd it around with a big grin on his face :) There was alos pigs, both pink ones and a black one, a peacock, calfs and cats. 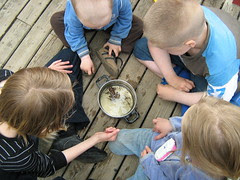 But we have had some animals here at home too ;)
The kids found a frog and had him/her in a bowl for a while before they relased it in the tadpole pound behind our outhouse.