Pair # 13 Socks without a name

It seems like I'll never catch up in the 52 ppiii along... But I've finished pair #13 today ;)
I'm so sorry about really bad photos, but with rain and very bad daylight this is the best I could do... The colour was hard to capture, but it's as the photo of the yarn at the bottom ;) 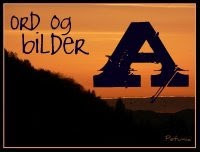 I've desided to join the norwegian version of ABC Wednesday. And A is for arbeidskar (working guy). Endre loves to help his dad and when we are in the forest at our lean-to, he always grab a saw and saws down a couple of underbushes ;)

Dinner on the muurikka The sun peaked out today, so there was no doubt - on with the
rucksack and straight to the forest :)

The highest mountaintops have gotten a new layer of snow...

And the bog has dresses herself in her fall dress. And as you
can see, it didn't take long before the rainclouds gathered again... 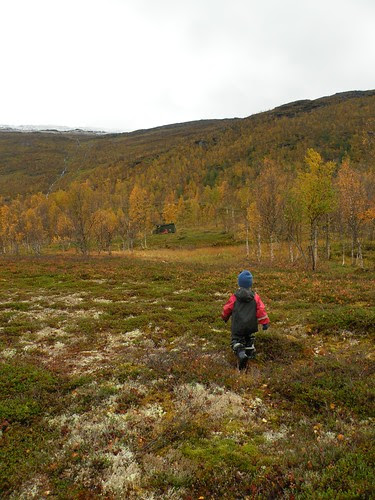 Endre and I are usually the last man up... 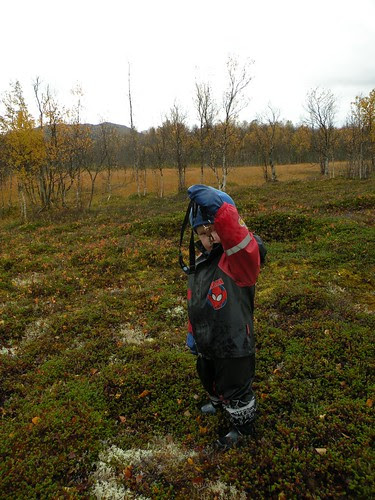 But that's ok, because we have the keys ;) 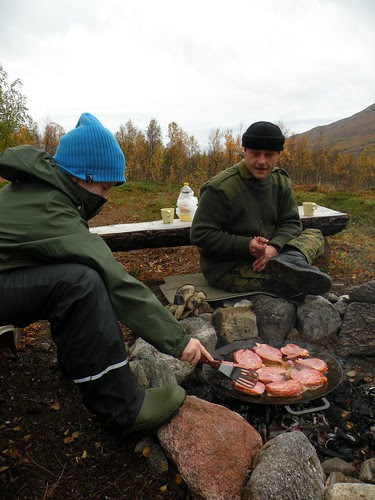 Today did we out our muurikka and fried some meat for dinner.
With boild rice made at home it become a great meal! 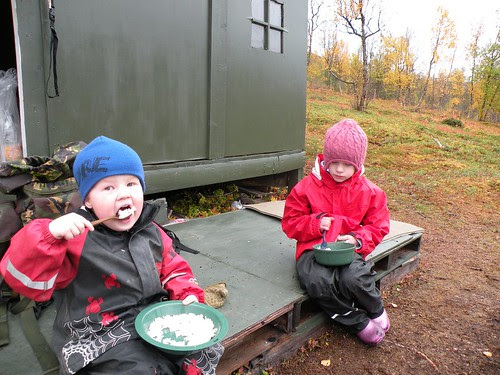 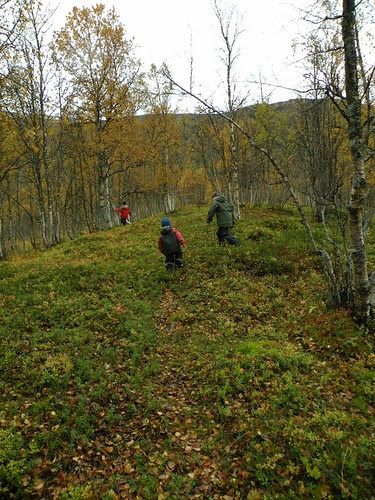 After dinner it was time for a small expedition. 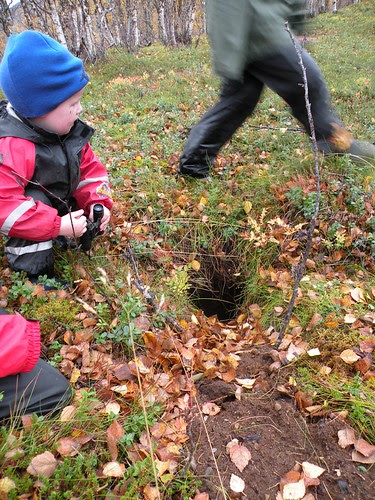 We found a lair. Maybe a fox or a hare have been living here..? 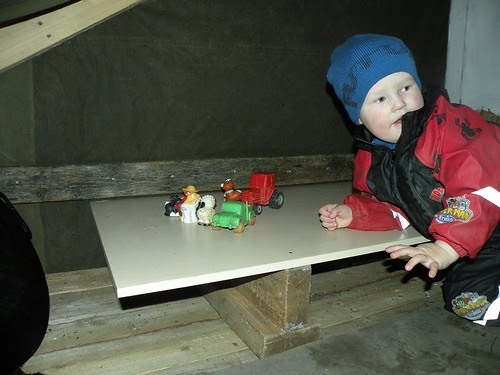 We managed to come back to the lean-to before a heavy rainfall hit us.
Then it's good to be able to close the door and have it warm and cosy inside :) 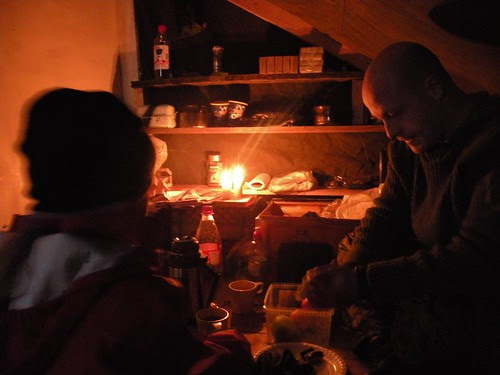 Enough with the rain now, please... 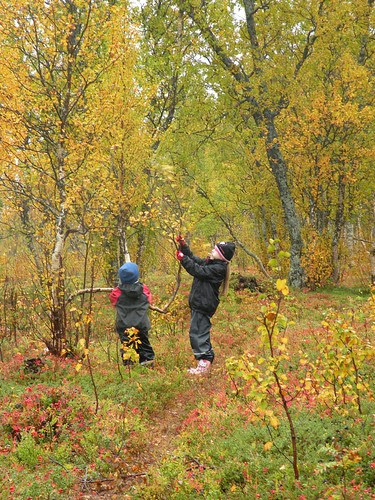 Picture from the weekend :)

I'm a bad blogger these days... But real life just takes over sometimes. I've started my fight agains those extra kilos, so I try to exercise at least three times a week ;) - When I'm home alone so the kids can't laugh at me *lol* Hubby's daughter is living with us every other week now, so having a teenager in the house has it's moment too... My afternoon is filled with helping the kids do their homework, making dinner, supper and then bedtime with reading outloud. So there are not much time for knitting left. And our weekends are mostly filled with time outdoors. And there's no doubt - fall is here now. Some of the trees have no leaves left do to the wind we've had the last days. And the rain has been pouring down for weeks now. I'm just looking forward to - degrees and snow now. Everything is better than cold rain!

So while I'm baking bread and doing some laundry today, I have time to enjoy a latte and knit a few rounds on a wool pants for Endre. It might be a new pair of monster pants, but it also just be a stripy one ;) We'll see.

And when the sun abandon us, I'll have to make some sunshine in another way. So I finished up some dishcloths :)

And finding a package in the mailbox is always great when the weather is bad :) This is a red swap package all the way from Eleanor in Australia :)
Lagt inn av Cloudberry kl. 12:33 PM 10 comments:

The fall is here to stay now. It's been raining for days and the
first snow has come in the mountains. The forest has changed its color
and it glows in yellow, orange and red. 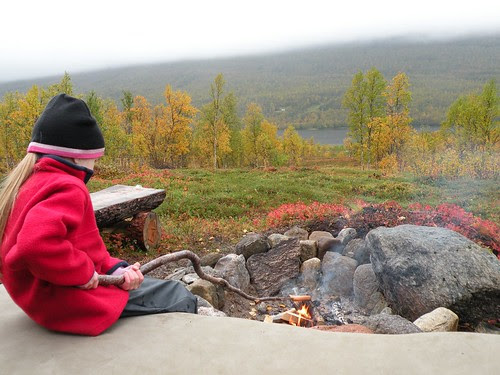 So even though it rained today, it was so great outside that we just had
to go hiking ;) So we had a great time with a fire, fries sausages, chocolate and cocoa. 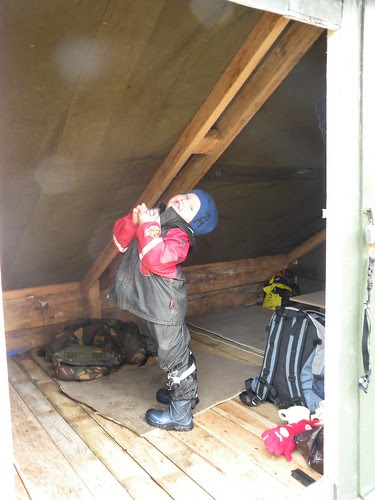 Some was just out for the candy ;) 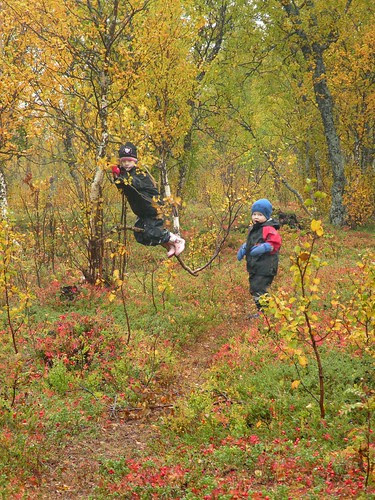 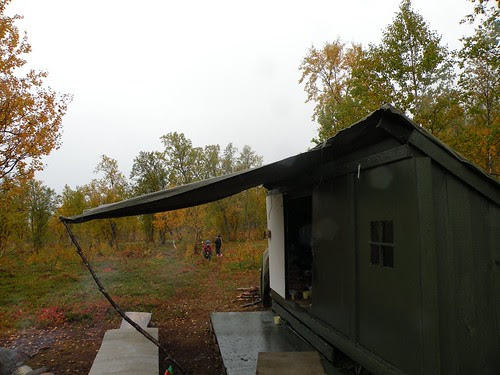 And under the biggest rain showers it was good with some extra "roof".

And we provided some extra firewood for the winter. And it's
great with some little helpers ;)
Lagt inn av Cloudberry kl. 8:23 PM 2 comments: 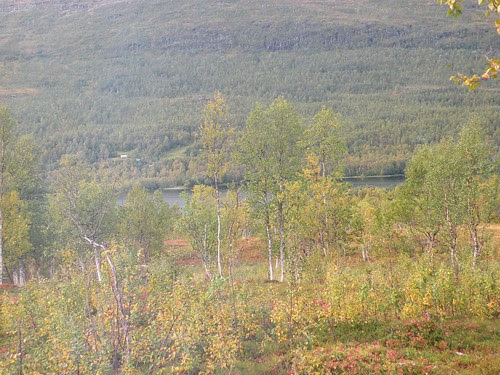 After several days with rain and wind, it was great to woke
up to a sunny and no wind day ! So we packed our backpacks and went to the forest ;)

Today have we (beside picking lingons) sawed down some trees and
underbushes so we could get a better view down to the lake. 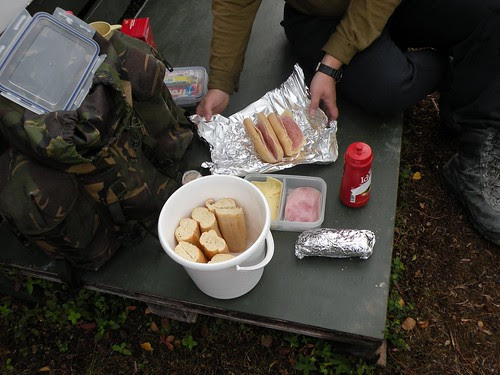 But everyone needs something good to eat - and today it was
baguetts with ham and cheese baked at the fire ;) 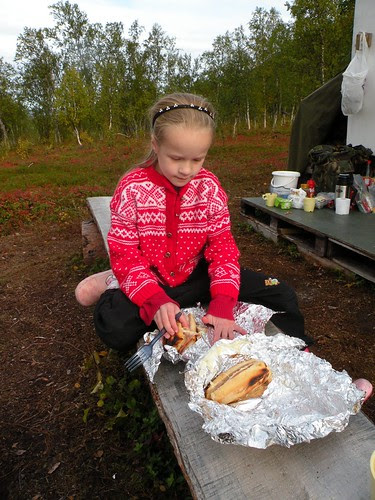 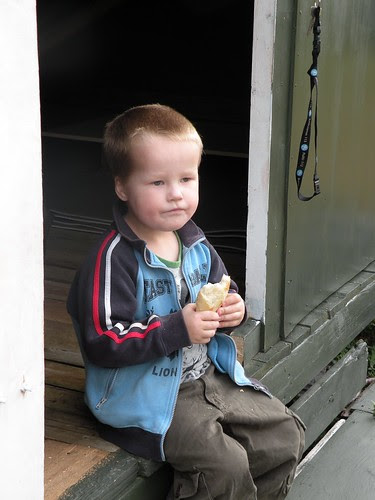 But some take it without filling... It's not always easy to be on a trip
when you are allergic. And today didn't any filling tempt him...

And for dessert - baked bananas with chocolate.

And 5 liter lingon was fast to pick ;) So tomorrow
there will be jam making. 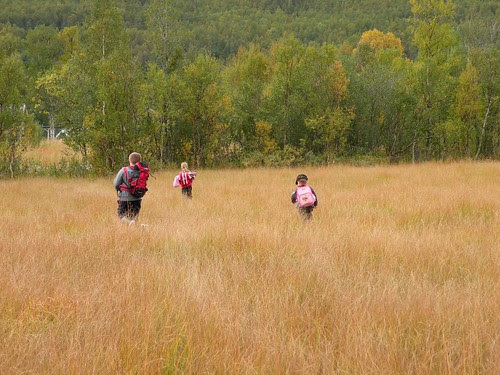 Somewhere over the rainbow...

We've had a rain storm during the night and the wind didn't stop until late today. It's been raining non stop, but the sun came out for about ten minutes and made these two beautiful rainbows. You can see by the big streams of water coming down from the mountain that it's been raining a lot. They use to be almost dry during summer.

I'm still waiting for the rest of the books in the Into the Wilderness serie by Sara Donati... So instead I've started reading Inkheart by Cornelia Funke - a really great book! I'm nearly done with it and I hope Inkspell is just as good. I think I'll have to by the film. Even though I know the film never becomes like the book... Eirin was very fasinated by the cover of the book which has the same cover as the film ;) So I might buy it just for her. She likes fantasy stories just like me - and I'm reading the Spiderwick chronicles for her for the second time now. She have seen the film several times and each time she gets thrilled and howls of joy and fear. But I really think the books are far better than the film! I could not get over that the river troll wasn't in it... One of Eirins favorite in the book :)

My knitting mojo is coming back slowly - and I have finished up a pair of socks for Eirin.
Pattern: k2, p2 with a short row heel.
Yarn: Ida Strømpegarn
Needles: 2,5 mm

And with the left overs fom I maaged to knit two calorimetry's. One for Eirin (she tells me it itches, but the one I made her a couple of years ago has been used a lot..) and one goes in the Christmas gift box ;)
Pattern: Calorimetry
Yarn: Ida Strømpegarn
Needles: 2,5mm

These water bottle bags/slings have been done over a month ago - and used a couple of times too. It's just me that have forgotten to take pictures...
Pattern: My own
Yarn: Various cotton
Hook: 4mm/G
Lagt inn av Cloudberry kl. 8:10 PM 11 comments: 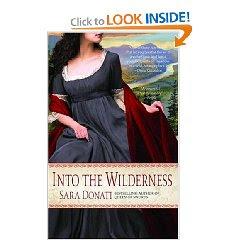 My knitting mojo has been lost this week... I've hardly touched the needles, because I've been totally lost in the book Into the Wilderness by Sara Donati. It's the first book in a serie of six. And I can't wait for my order from amazon for the rest ;)

It is December of 1792. Elizabeth Middleton leaves her comfortable English estate to join her family in a remote New York mountain village. It is a place unlike any she has ever experienced. And she meets a man unlike any she has ever encountered--a white man dressed like a Native American, Nathaniel Bonner, known to the Mohawk people as Between-Two-Lives. Determined to provide schooling for all the children of the village, she soon finds herself locked in conflict with the local slave owners as well as her own family. Interweaving the fate of the Mohawk Nation with the destiny of two lovers, Sara Donati's compelling novel creates a complex, profound, passionate portrait of an emerging America.

And I've received some great packages in the mail this week :) First my 3rd package in a little envelope swap from Rowlesgirl. And a book swap from kyrasmom. Beautiful yarn from Knit Picks and a Terry Pratchett book ;) Can't wait to read it.

Have a great weekend everyone! There might be som knitting during the weekend and maybe some finsihed projects to show off next week ;)
Lagt inn av Cloudberry kl. 8:25 PM 7 comments:

It's September already and I've been going through the kids knitted stuff today. I've pulled out all socks, hats, scarfs, mittens and gloves. And have sorted out the ones that have been outgrown or outworn. Then I've ironed on name tags on the one that missed one. And as you can see there's quite a large pile on the floor, but not all has been knitted my be. They have a grandmother, a great grandmother and some of hubby's aunts always give them knitted mittens or socks for Christmas ;)

But for my question - What do you do with all of you knitted stuff that gets outgrown?? Usually things get handed down to the next kid in line here, but with a girl in the middel there is a lot of pink going on... And Endre is not always happy to wear pink ;) So I've sent some away to fleamarkets or secondhand stores - if it's little used.

This is what got sorted out of the pile above. Not much, but most of it are mittens that have been felted by the snow to some hard, not good to wear mittens. And the one that likes knitted mittens most are Erlend. I'm planning on knitting him a pair of these ;)
I'm not sure if I'll throw any of them in the bin yet. Maybe the mittens, but the hats and scarfs can be ripped and used agian. I guess it will be put in a bag with the ones I sorted out last year...
Lagt inn av Cloudberry kl. 11:20 AM 6 comments: