I picked up a skein of selfstriping yarn last time I was at my yarn shop and the plan was to knit a pair for Hubby with an aftherthought heel. Well, I did and made him try it on, but he didn't like it... So instead I did a short row heel.

This is my first project for Stash Dash this summer. Not sure if I'll managed to knit up 5K, but I'll give it a try!

One of my knitting goals this years, was to make the kids some Dr. Who stuff.
Well, the first one is done. A pair of Tardis socks for Erlend.
We try to watch one or two episodes of Dr.Who on Saturdays and it's a show we all like :)
I'm not sure what to make for the other two, but there might be some dalek mittens and hat and perhaps a dalek or two. We'll see ;)

On The Needles :: Stormborn & Tardis Socks

Knitting: I'm halfway through clue 2 on my Stormborn shawl. I like it so far, but I do hope there will be some new lace in the next clue... And I have one Tardis sock off the needles and have casted n for the second one.

Reading: I picked up Kanten av isødet - (Chasing the Light in english) the last time I was at the library. Haven't read much yet, but I think it might be good.

It's the early 1930s. Antarctic open sea whaling is booking and a territorial race for the mysterious continent is in full swing. Aboard a ship setting sail from Cape Town carrying the Norwegian whaling magnate Lars Christensen are three women: Lillemor Rachlew, who tricked her way on to the ship and will stop at nothing to be the first woman to land on Antarctica; Mathilde Wegger, a grieving widow who's been forced to join the trip by her calculating parents-in-law; and Lars's wife, Ingrid Christensen, who has longed to travel to Antarctica since she was a girl and has made a daunting bargain with Lars to convince him to take her. As they head south through icy waters, the race is on for the first woman to land on Antarctica. None of them expect the outcome and none of them know how they will be changed by their arrival. - From Goodreads -

What a great combination of music, knitwear, and landscape!
Look at all those pretty sweaters...

I found the video on the blog Faroe Strands - a great blog for inspiration.
Lagt inn av Cloudberry kl. 7:00 AM 1 comment: 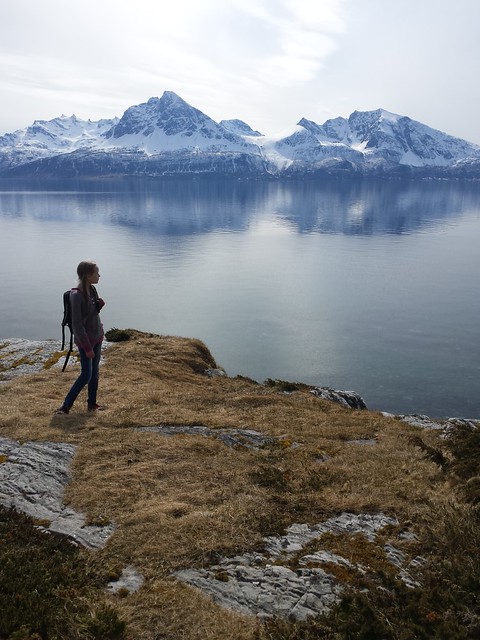 The snow is still on the ground at our place, so we decided to head out to the coast and go hiking on Saturday. It got quite warm, so both our jackets and hats could be stuffed into our backpacks :) We saw both coltsfots and sprouting leaves, so spring is here for sure.

You can see more phots on our outdoor blog. 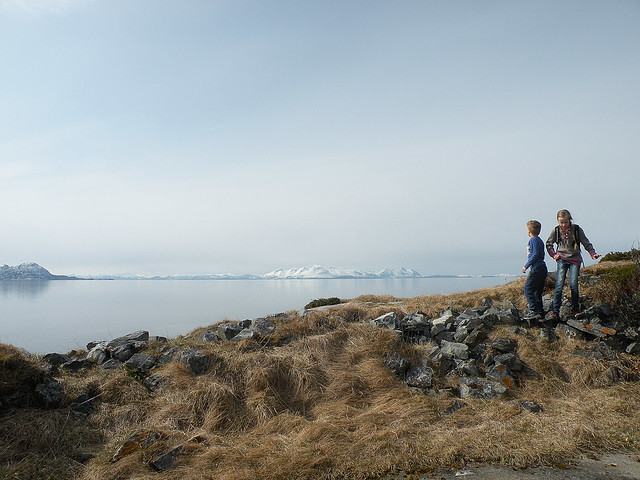 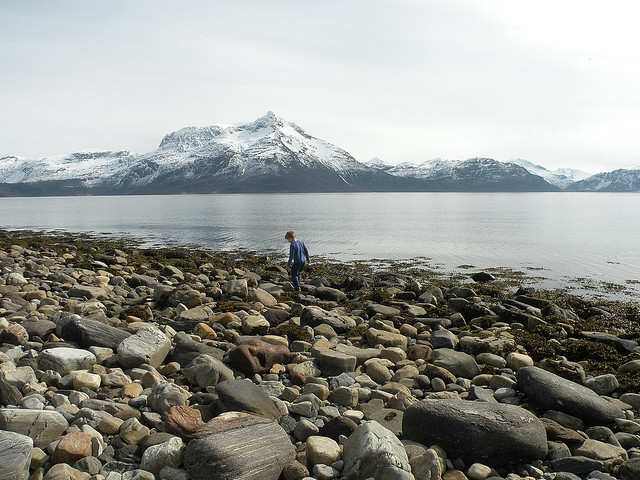 I finally pulled myself together and weaved in all the ends and sewed on the pockets on Eirin's Polka Dot Sweater today. And it came out great! As it is knitted in acrylic, I didn't dare to use the iron and steam block the polka dot pattern on the sleeves and the pockets... So I dipped them in water, blocked them with pins and let them dry. They became less wobbley, but I still would have wanted them to be flatter. Hopefully they will become that with wearing.

Last time I stopped by my local yarn shop, I found some selfstriping yarn :)
This skein was in black and bright colours - they are a bit brighter in real life. The yellow and green pops out a bit more than I managed to capture in the photos..
I casted on a little fewer stitches than I normally do as the yarn is a little thicker than my ususal sock yarn.
I meant to knit them for myself, but Eirin really wanted them, so she'll get them. They are a little long for her foot, but it's good to have a pair she can grow into ;)

I decided to knit an afterthought heel. I have not made many of those before, but I keep seeing them on selfstriping socks and they do make those heels look a bit prettier than a short row heel. Anyway, this one seems to fit Eirin's foot, so I guess I'll knit it again for her. I have another pair on the needles for hubby and I'm  thinking about doing an afterthought heel on his socks too. Not sure if they will fit his foot, but we'll see ;)

Between other projects I need to have some mindless to knit on. These socks have been my tv-knitting projects lately ;) They are thick wool socks where the stripes are made from left overs. Great to use them up.

On The Needles :: Stormborn

When I saw that there was going to be a Game of Thrones mystery kal this month, I just had to play along :) I love the books and enjoy watching the series. And when I found out it was a shawl inspired by Daenerys it had to be blue.
The first clue came out on Monday, but I didn't have time until today to cast on. I finished it this morning and I really like it so far. It's not so easy to see, but we have dragon scales :)