Is not normal in our part of the world...
There's been set new temperature records in some parts.
We haven't had it so warm since 1984...
So we eat icecream and popcicles.
And head out to the beach.
Yes, the water was freezing!!
But the kids didn't care ;) 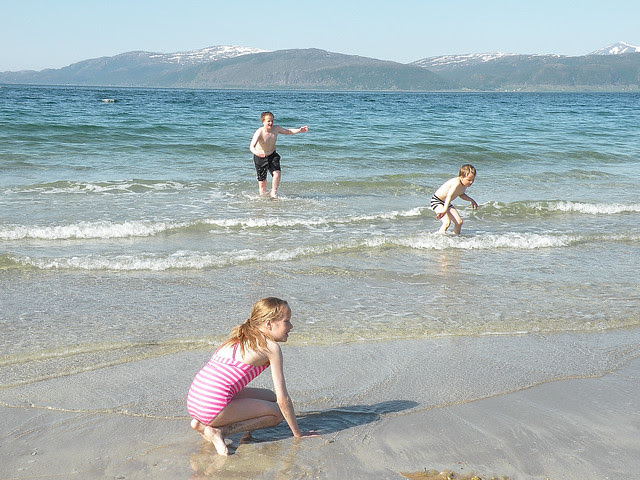 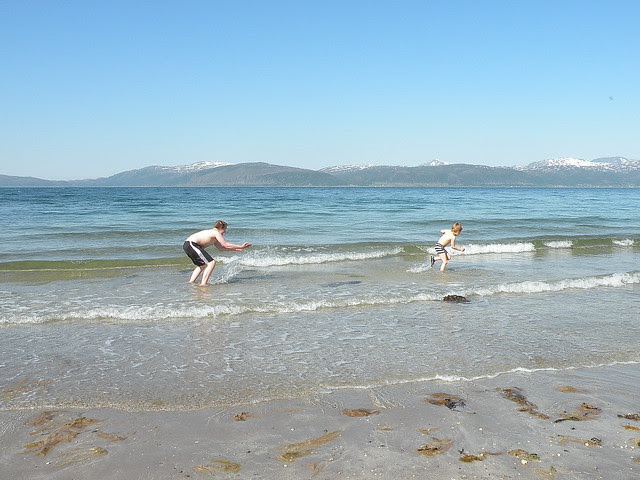 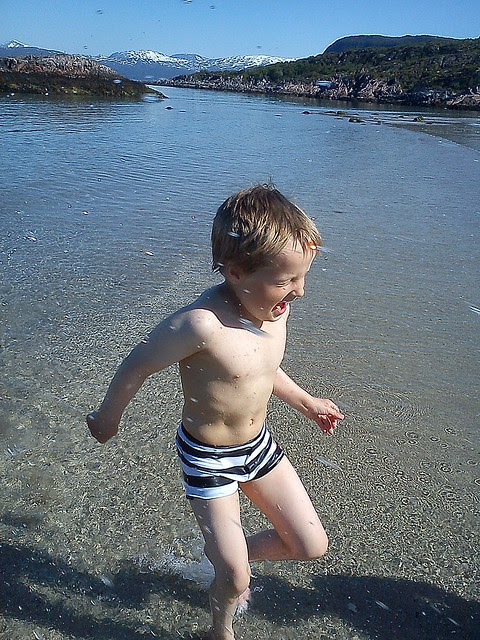 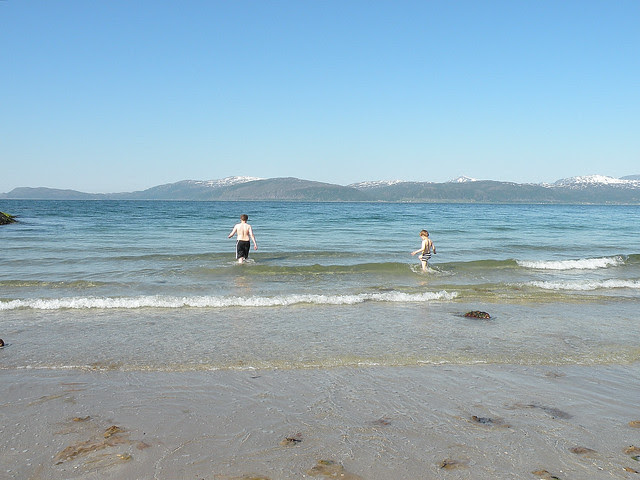 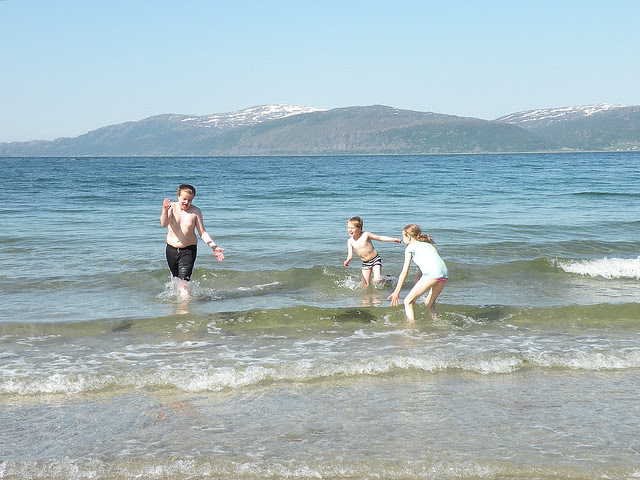 On the needles :: Socks for Hubby

Knitting: Hubby seems to wear holes in all his socks... So there's nothing else to do but knit him some new ones ;) I'm knitting two pairs simultaneously so I can have them done at the same time. Just the toes left to knit.

To pick those first, sweet tomatoes

and eat them on fresh baked crunch bread :)

I'll have to admit that the plant was filled with tomatoes when I bought it on Friday ;)
I just had to bring it home and put it in the greenhouse when I saw it at the local garden center.
Lagt inn av Cloudberry kl. 11:14 AM 1 comment:

Since I posted, but life been busy...
I've been knitting like crazy to finish the three jackets and two hats for the knit book. Photos further down. The last jacket was mailed off today. After I was done knitting the last one a few days ago (my mum has had it to make the final finishing, you know, steaking and all that...), I didn't know what to do with my new "knitting freedom". So I found a pair of socks I had casted on a long time ago. Mindless but still satisfying as I decide what to make next.

We've also had some beautiful weather the last week.
Seems like mother nature decided to skip spring and go straight for summer this year. The temperature has been 21 C, the forest has turned green, and we have forgotten all about the big load of snow we got not so long ago ;) In other words - I've spent almost every spare moment on the deck soaking up sun :)

This gazebo stood in my father in laws garden, but no one used it, so it had started to decay.
Hubby thought it could be a great greenhouse, so he and Erlend took it apart and built it up!
It needed a little paint and still needs a roof, but I am so happy that I finally have a greenhouse :)

And see - pallet collars have just the right size to go around the greenhouse as rised beds.
I have planted zucchini/courgette in the compostbread I made in the fall. I have more of them inside the greenhouse and I'm hoping they will grow, but you never know with our clima...

The rhubarb has started to curl their way up of the ground, so there will (hopefully) be made something in the kitchen soon :)
The carrots - purple, have been planted out. The redcurrant is sprouting, but so far it looks like my raspberry bushes is dead and it looks like the same with the strawberry plants :(
Sugar peas are also waiting in the greenhouse along with leeks and spring onions.
Different types of salad is still waiting in their seed bags, but soon I will get them growing too.

The jackets and hats for the knitbook that will be published later this year by Tove Fevang.

On the needles :: Two little jackets for a new knitbook

It's been quiet here for days with no fo's or much else.
Most of my time is spent knitting on the two jackets for Tove Fevang's new knitting book Småbarnstrikk 0-4 år, that's coming in the fall. Here's a photo of her making what I think is step by step photos of how to steek. The jacket she is holding looks pretty.
It'a a fun knit, but I'm starting to get a bit bored as I'm knitting the same pattern on both.
I have half a sleeve left to knit before I will take them to my mom so she can do the steeking. I think I could manage to do it, but I don't dare as they are for a book and not myself...
Yarn for a third jacket is on it's way in the mail, so there will be quiet here for a couple of more weeks...

What's on your needles?

I've had the spring feeling for a couple of weeks now, with the warmth of the sun melting the snow, wearing summer shoes and less clothing, the woodpecker is back and hacking away early in the morning - one does not need an alarm clock ;). But it's not real spring until we have found the first
coltsfoot.

The snow has melted fast due to the sun and wind. But it's still cold - we woke up to -3 C this morning. So there is not much growing yet... But I have lots of plans for my vegetable garden this year.

Inside some of the seeds I planted last week has sprouted :) This is sugar peas.

Hopefully the rest of the seeds will start sprouting soon too.

Some of the seeds I have planted.
Do you have a vegetable garden?
What are you growing this year?
Lagt inn av Cloudberry kl. 7:04 PM 7 comments: