It's the first time I have knitted a shawl in just 4 days! When I casted off this shawl on Wednesday it turned out a bit small, so I ripped it. I wasn't sure if I wanted to cast on again, but it's a beautiful pattern and I really wanted a new red shawl for fall, so I did - with 48 extra stitches.

It's an easy pattern to memorize, so the second time knitting this was so much easier than the first. 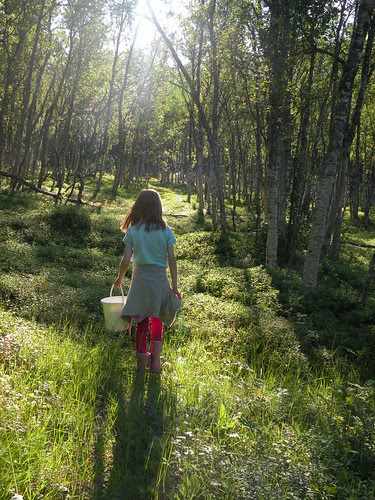 Eirin and I headed out in the forest this afternoon looking for cloudberries. In Norway cloudberries is known as the gold among berries. Everyone have their own secret bog. This year is a good year for cloudberries due to the warm summer we have had. We hoped for lots of cloudberries, but someone have been out picking before us... So we just found about 1 liter. But it's enough since I am the only one that eats cloudberries in this household ;) 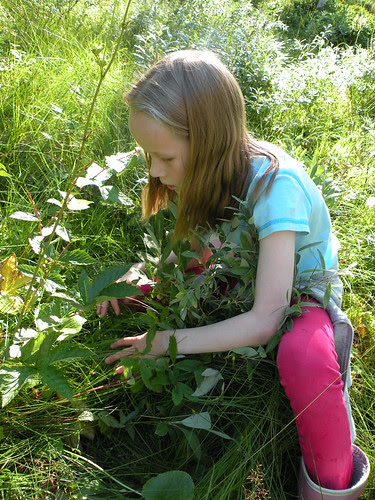 By a little stream Eirin found a tiny little frog :)

No one we knew was killed or injured in the attack on Friday. And although we have tried to shield the kids from news broadcasts, etc., they know what has happened. It is in these situations, it appears how different they are. While some of them do not think so much about it, there are some who think and ponder. And I think it's hard to explain how it is possible that a person can be so vicious. And not least, I think it is difficult to promise that something like this will not happen again ...
Many have said and written about what has happened, but for me I think this statement says it all.

When one man could cause so much evil - think about how much love we can create together.

And life must go on, so even though it feels like the days have stood still, it's Wednesday again and time for Yarn Along and WIP Wednesday.

Reading: I finished The Crimson Petal and the White by Michel Faber last night. And even though I was sure the end would not be a happy end, it surprised me. Not by being happy, but by being surprising. I've pulled out a book that's been laying on my shelf for a long time. I read a couple of chapters before other books took it's place. Queen of Swords is the 5th book in the Into the Wilderness seris by Sara Donati. I love this series! And I'm not sure why I put this book aside... but I look forward to read more about the Bonner family and their strong women.

Crocheting: My potholders are done. Eirin's socks is also off the needles, but I'llblog about them later ;) The shawl... well, I've ripped it. I casted off the other day, but it was too small... I really regret not casting on more stitches... So I'm looking for the inspiration to cast on again. Instead I've started to seam together the blanket I've been crocheting from leftover sock yarn. It might not be the prettiest thing I've made, but I love it and hope to have it finished soon :) I haven't made any progress on the cowl, but I might finish it before the months is over due to Project Spectrum ;)

So, what are you knitting/crocheting and reading this week??
Lagt inn av Cloudberry kl. 11:27 AM 14 comments:

Some small items off the hook and needles

I have finished a couple of small items last week. A pair of potholders.
Pattern: Potholders in waffelstitch
Yarn: 96 g Handknit Cotton from Rowan
Hook: 3 mm

With all the warm weather we've had so far this summer, I had to knit up a pair of  anklets.
Pattern: Made up as I knitted along. 64 st and a short row heel.
Yarn: 39 g Meilenweit 1oo Cotton Fantasy # 817 from LAna Grossa.
Needles: 2,5 mm

And what's better than finding a skein of yarn in the mailbox :) I had to buy one from Candy Skein. The colorway is Blackberry and I plan to use it in this kal.I haven't picked a pattern yet though - there are so many beautiful shawls to choose from... 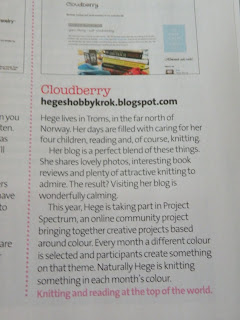 And now for something completly different. A little while ago I got a comment from Sue, who had found my blog after reading about it in Simply Knitting! So ofcourse I had to buy that issue ;) And I must say I feel honored to be mentioned along with Cotton and Cloud and Fuzzy Mitten!
Lagt inn av Cloudberry kl. 11:03 AM 4 comments:

My thoughts goes out to all of those who have lost someone in the terrible terror attack in Oslo and Utøya.
Lagt inn av Cloudberry kl. 11:47 AM 10 comments:

I missed last weeks Yarn Along and WIP Wednesday, but the picture would have been the same as today ;)

Knitting/crocheting: The Summer Mystery Shawlette is growing, although very slowly. Knitting lace from a chart is not the thing to knit on when the kids are awake, so I just manage to knit a few rows each night... Eirin needs new socks for fall so I'm almost done with one pair. I'm doing a bit of crocheting too these days. The blue project might be a cowl... It's actually just a piece I started to keep my hands busy while watching a movie ;) The other crochet project is a pair of potholders.

Reading: I'm reading a brick of a book, but I'm loving every page of it. It's The Crimson Petal and the White by Michel Faber. It's the story of a well-read London prostitute named Sugar. We learn about the positions and orifices that Sugar and her clients favor, about her lingering skin condition, and about the suspect ingredients of her prophylactic douches. Still, Sugar believes she can make a better life for herself. When she is taken up by a wealthy man, the perfumer William Rackham, her wings are clipped, and she must balance financial security against the obvious servitude of her position. The physical risks and hardships of Sugar's life (and the even harder "honest" life she would have led as a factory worker) contrast--yet not entirely--with the medical mistreatment of her benefactor's wife, Agnes, and beautifully underscore Faber's emphasis on class and sexual politics. (From Amazon)
And BBC have made a tv series of the book - anyone seen it? I think it's one I need to buy ;) Just love Victorian movies and tv series!
Lagt inn av Cloudberry kl. 9:10 AM 14 comments: 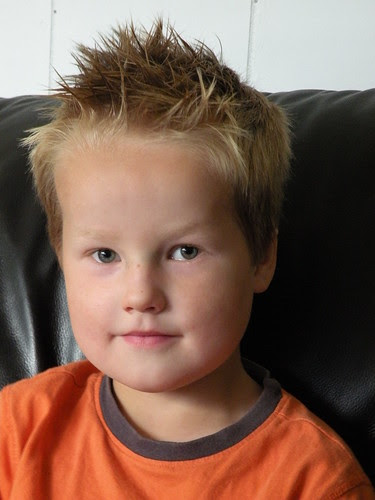 I've had several post planned in my head, but the time hasn't been on my side lately... We've celebrated Endre's 6th Birthday :) He had some friends over on Saturday and ofcourse there was some chocolate cake :) I can't believe how fast time flies - it feels like it was yesterday I had him home with me from the hospital and now he is a big boy starting school in a months time!!
Yesterday he had his first haircut at the hairdresser - no more hair clipping with daddy's hair clipper ;) 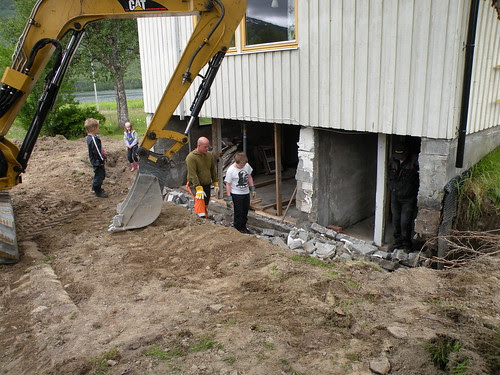 Hubby and his dad have knocked down one of the walls that was starting to collapse inward. So the garden is a big mess at the time. But then again - maybe some of my plans for the garden and a vegetable garden might be completed ;) 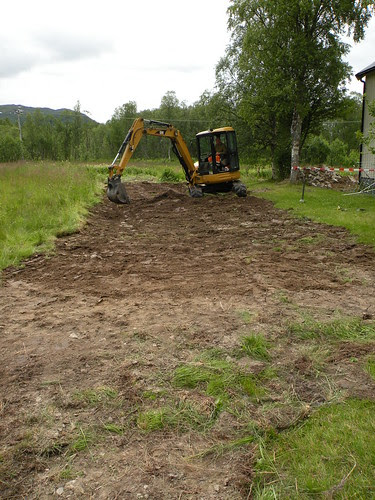 This was all a part of the meadow before, but I hope this will be my vegetable garden next year :)

Some of you might wonder if the seeds we planted this spring have grown into something... Well, the cucmbers grow big and had lots of beautiful, yellow flowers, but no cucumbers, so we throw them out. We have two paprika plants and they have one small paprica each. Hpefully they will grow bigger.

Since I have no vegetable garden yet, the leeks have to grow in milk cartons ;)

The Nasturtium have grown big and rich, but they have no flowers yet...

This is from the pink flower mix, but I have no idea what it is.. 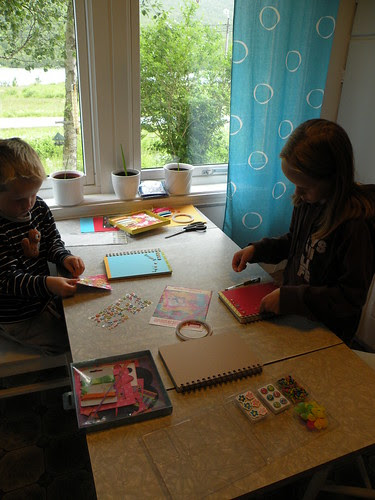 The rain has poured down the last few days. It's been cold and winsy with just around 7 C. So we have only been a few short trips outside... So we have to come up with something fun to do insied ;) I've had some undecorated books, paper and stuff for decoration laying around for days like this. So Endre and Eirin made a book each today :) It's white paper inside the books which they can draw on.

When they made the books, I came to remember that we have made books before. In December, and I never blogged about them...

We gathered around the kitchen table later in the day as well. The kids helped me cutting vegetables for dinner. On cold, windy fall-like day like today, we have to have some comfort food. So we made "lapskaus" or stew in english :)
Lagt inn av Cloudberry kl. 7:50 PM 11 comments:

I’m finish with the vest :) After Endre tried it on when I had finished it, I see that I might should have knitted with size 4mm needles or knitted the 8 years size. Because it got a little tight around the chest… But it fits him in lenght and around the stomach. But then again all kids comes in differenst shapes and sizes ;)

Knitting: I'm test knitting a vest at the moment. It's for Endre :) The two whales I was working on last week is finished - and the kids loved them :)

Reading:  I've read out both The Roseatta Key and The City of Thieves since last time. And I even read the third book about Ethan Gage as well - The Dakota Cipher. They were all good books, but I loved The City of Thieves!! Now I'm reading the second book in a norwegian fantasy trilogy and a Polish book Heksenes datter (The witches daughter).
Lagt inn av Cloudberry kl. 9:58 AM 9 comments:

I started these back in May and promised Eirin & Endre that I would finish them while they was on summervacation with my Mom. So I did :) They wanted them to have some little friends, so I added some starfish and fish ;)
Pattern: Wilbur Whale from Crochet designs for kids.
Yarn: Mor Aase bomull.
Hook: 3 mm. 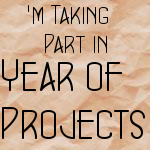 I have made very few socks lately - I think I got somewhat bored with the whole sock knitting... But I have desided to join a Year of Projects. And yes, I'll try to knit up five pairs of knee-high socks from  Barb Brown's book Knitting Knee-Highs: Sock Styles from Classic to Contemporary.There are so many beautiful patterns in this book, but I've desidedI'm giving these pattern a try. 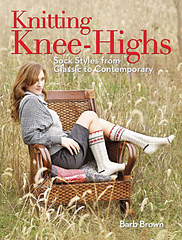 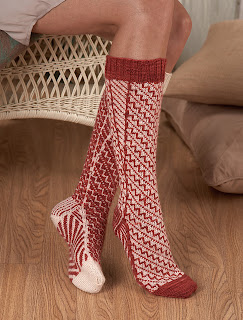 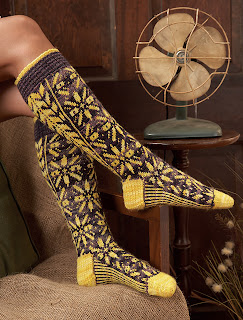 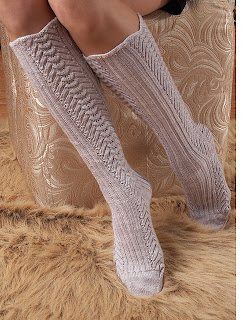 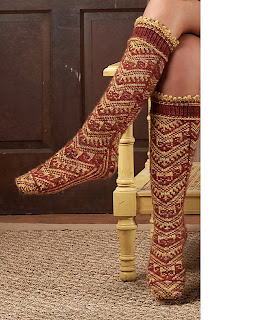 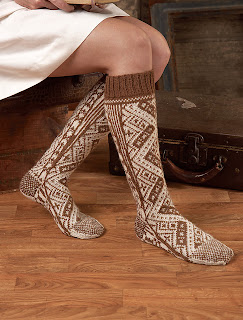 Another month is over and I've collected some of my green favourites over at Flickr. June has been the gren month in Project Spectrum and now it's time for one of my favourite colours - Blue :)