After several days of warm sunny weather with temperatures up to 17 C, we woke up to low clouds all the way down the mountain sides and colder temperatures. So a fire was needed to keep us warm and cosy this morning.

Knitting: As you know, I'm trying to knit up my sockyarn stash and for some reason I seem to cast on a lot of Rye socks ;) This is my 6th pair, but really, I love this simple yet decorative pattern.
The Menehune shawl is off the needles and just need to be blocked. And I frogged the Nurmilintu shawl.

Reading: I started a new book last night - The Sign by Raymond Khoury. I love this mystery thriller genre, so I hope this is a good one.
I still have a few chapters left of Shadow of Night, which I love, so I am trying to make it last as long as I can ;)

In Antarctica, a scientific expedition drops anchor for a live news feed. As the CNN journalist begins her report, a massive, shimmering sphere of light suddenly appears in the sky, enveloping the ship in luminous white light before disappearing as mysteriously as it arrived. The entire event witnessed by an incredulous world audience.Meanwhile in a dusty bar in Egypt, a dozen men are lazily discussing the state of the world when the brilliant, glowing symbol on the television stops them cold. One man breaks out in a sweat, crosses himself repeatedly, and rushes out of the bar muttering the same phrase over and over again: It can't be.Across the Internet and around the globe, a stunning controversy threatens to consume the world: Has God finally decided to reveal himself? Or is something more sinister at hand? -Goodreads-

I first tried to knit this yarn up in the Rye pattern, but they didn't turn out pretty.
So I just made a 2x2 rib socks instead. And they still doesn't look pretty....
Some times the yarn is prettier in the skein than knit up. But then again, I don't like yarn that pools.
But Erlend is happy as he got himself a new pair of socks and that's all that matters, right?

On The Needles :: Shawls and socks

Knitting: My Nurmilintu which just had a few rows knitted last week is almost done. I just have the last lace border left to knit, but I'm thinking about frogging it... Yes, that's right. Frog it. I like the colours and the pattern, but it's not long enough to be a scarf one can wrap around the neck the way I like it. So I think I'll use the yarn for a Hitchhiker instead.
I watch some podcasts and I found out that Mel from Singlehandedknits can use both her hands again and have started a new podcast - With Mel. And we can knit along with her on one of her new shawlette patterns Menehune. So of course I had to find some yarn and cast on when I watched the first episode :) I'm going to make it bigger and use up most of my yarn, so I'll have to do a little math before I start knitting the edge.
And of course there is a pair of socks on the needles too ;) I've decided to use up all of my pretty skeins I've been saving, before I can buy some new ones. And sometimes the yarn are prettier in the skein than knit up as a sock... But then again I've never been a hugh fan of yarn that pools... But Erlend is happy for a new pair of socks and doesn't care, so I just knit to get them off the needles so I can find another skein and cast on another pair ;)

Reading: The same books as last week. Shadow of Night is great and I manage to read a few chapters each night in bed. And I'm almost done with City of Ashes and I think it's just as good as the first book City of Bones. 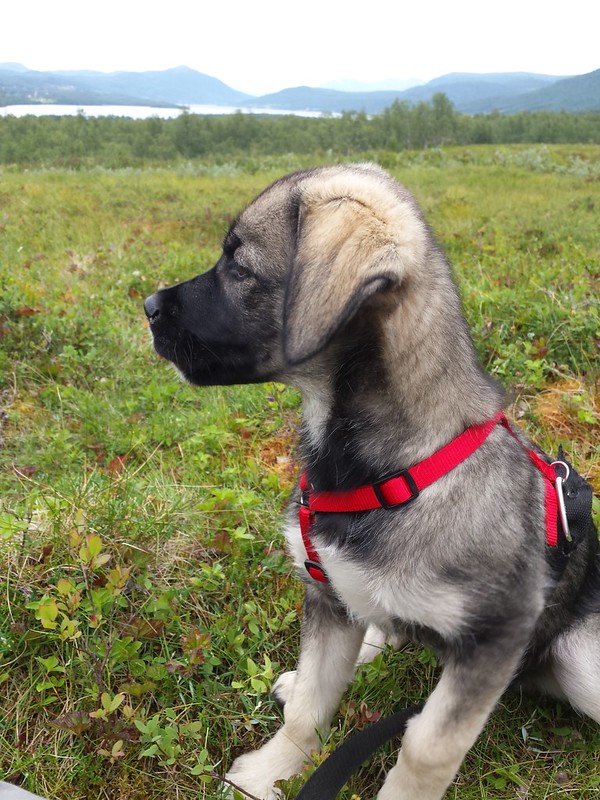 - A Friday ritual.
A single photo - no words - capturing a moment from the week.
A simple, special, extraordinary moment.
A moment I want to pause, savor and remember.
Lagt inn av Cloudberry kl. 7:24 PM 5 comments:

Knitting: I finished the last pair out of three ankle socks for Hubby this morning. More info and pictures below. There's been a lot of socks on my needles lately, so I felt the urge to cast on something else... A few days ago I saw a new shawl on Ravelry and just knew I had to make it. So I dived into my stash and found a skein that's been there for years and casted on. Not sure if it's my kind of colours, but so far it knits up beautifully. The pattern is Nurmilintu and the yarn is Shine by Spunky Eclectic.

Reading: As you can see I'm reading the second book in two series :) I finished A Discovery of Witches and City of Bones last week and had to start their sequels Shadow of Night and City of Ashes right away! So far they both live up to the first books.


Historian Diana Bishop, descended from a line of powerful witches, and long-lived vampire Matthew Clairmont have broken the laws dividing creatures. When Diana discovered a significant alchemical manuscript in the Bodleian Library,she sparked a struggle in which she became bound to Matthew. Now the fragile coexistence of witches, daemons, vampires and humans is dangerously threatened.Seeking safety, Diana and Matthew travel back in time to London, 1590. But they soon realise that the past may not provide a haven. Reclaiming his former identity as poet and spy for Queen Elizabeth, the vampire falls back in with a group of radicals known as the School of Night. Many are unruly daemons, the creative minds of the age, including playwright Christopher Marlowe and mathematician Thomas Harriot.Together Matthew and Diana scour Tudor London for the elusive manuscript Ashmole 782, and search for the witch who will teach Diana how to control her remarkable powers...             -Shadow of Night-


Clary Fray just wishes that her life would go back to normal. But what's normal when you're a demon-slaying Shadowhunter, your mother is in a magically induced coma, and you can suddenly see Downworlders like werewolves, vampires, and faeries? If Clary left the world of the Shadowhunters behind, it would mean more time with her best friend, Simon, who's becoming more than a friend. But the Shadowhunting world isn't ready to let her go — especially her handsome, infuriating, newfound brother, Jace. And Clary's only chance to help her mother is to track down rogue Shadowhunter Valentine, who is probably insane, certainly evil — and also her father.To complicate matters, someone in New York City is murdering Downworlder children. Is Valentine behind the killings — and if he is, what is he trying to do? When the second of the Mortal Instruments, the Soul-Sword, is stolen, the terrifying Inquisitor arrives to investigate and zooms right in on Jace. How can Clary stop Valentine if Jace is willing to betray everything he believes in to help their father? - City of Ashes-

On the Needles :: Summer socks

Knitting: Hubby wanted some ankle socks he could wear to work when it's hot, so I went through my stash and found some left over skeins. I might have to add in a second colour for the heel and toe, but we'll see.

Reading: I've not been reading as much as I would have liked to this summer...
I've read Divergent, and liked it so much I guess I'll need to buy the next boks in the series.
I'm still reading my way throuhg a Discovery of Whitches. I love this book and it's so much better this second time I'm reading it. Can't wait to start on the second book in the series :)
I needed another book to bring with me outdoors and to pick up when I'm not knitting, and I found City of Bones in my shelf. Love it!! And lucky me - I have the next two books waiting on the shelf as well :)


When fifteen-year-old Clary Fray heads out to the Pandemonium Club in New York City, she hardly expects to witness a murder― much less a murder committed by three teenagers covered with strange tattoos and brandishing bizarre weapons. Then the body disappears into thin air. It's hard to call the police when the murderers are invisible to everyone else and when there is nothing―not even a smear of blood―to show that a boy has died. Or was he a boy?

This is Clary's first meeting with the Shadowhunters, warriors dedicated to ridding the earth of demons. It's also her first encounter with Jace, a Shadowhunter who looks a little like an angel and acts a lot like a jerk. Within twenty-four hours Clary is pulled into Jace's world with a vengeance, when her mother disappears and Clary herself is attacked by a demon. But why would demons be interested in ordinary mundanes like Clary and her mother? And how did Clary suddenly get the Sight? The Shadowhunters would like to know...  - from Goodreads -


What are you knitting and reading this week?
Joining Ginny and Nicole
Lagt inn av Cloudberry kl. 3:29 PM 10 comments:

I started these back in April after I finally bought the book Garnglede i Rosendal - (Fun with yarn in Rosendal) by Turid. You can have a look inside the book here.
I just knew I had to make a pair of long cosy socks, but when I got to the heel on the first one I lost my mojo as I didn't like the heel that's in the pattern.
So a month or so ago I picked them up again and started to knit the second sock while I wondered about what to do about the heels... I ended up knitting my standard slipped stitch heel and I also decided to knit stripes under the foot rather than the "salt and pepper" pattern. I also made a black toe to match the heel and cuff.

We found a handfull off wild strawberries on our hike last week :)
I haven't eaten this since I was a was a child.

There's been some knitting in my absent ;)
I needed some mindless knitting and once again I found myself casting on a pair of Rye.
I think this is my new favorite vanilla sock pattern.

I've also finished these socks I started back in May.
I hoped I would have enough yarn for a pair for myself, but I ran out of the purple one.
So they fit Eirin, but she told me she had enough wool socks!! o-O
But I guess shw will wear them when winter comes... 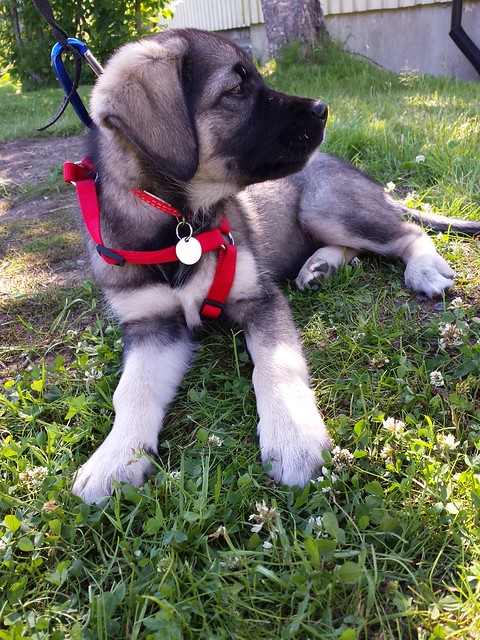 It's been quiet here for a couple of weeks.
And the reason is Alaska - our new family member.
She is a beautiful husky and retriever mix born on May 14th.
Full of energy and she already loves to go on small hikes in the forest.
So there is no doubt she will become a great hiking pal :) 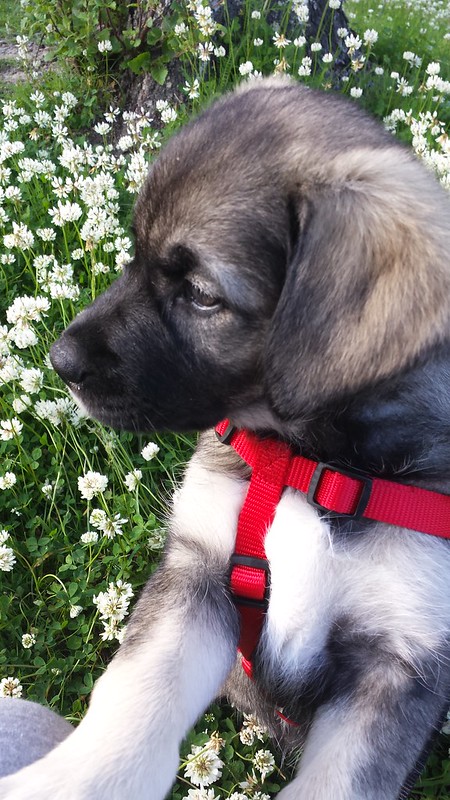 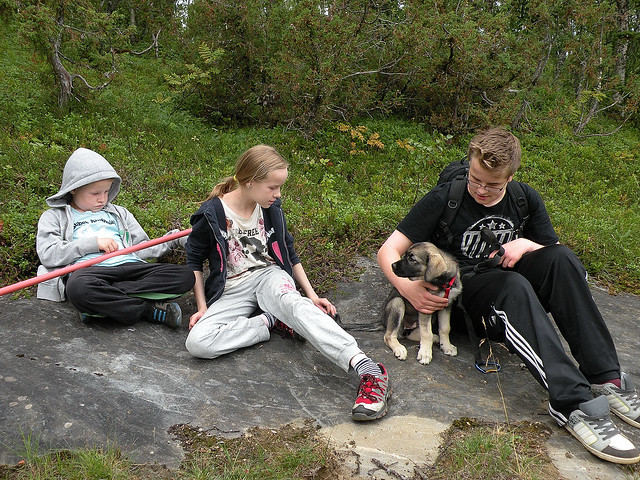 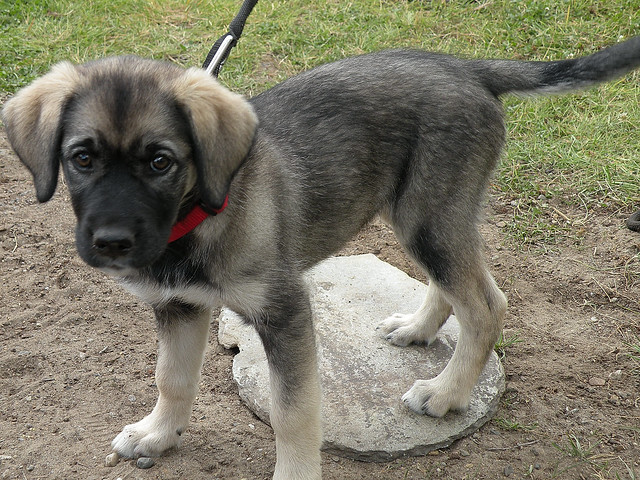 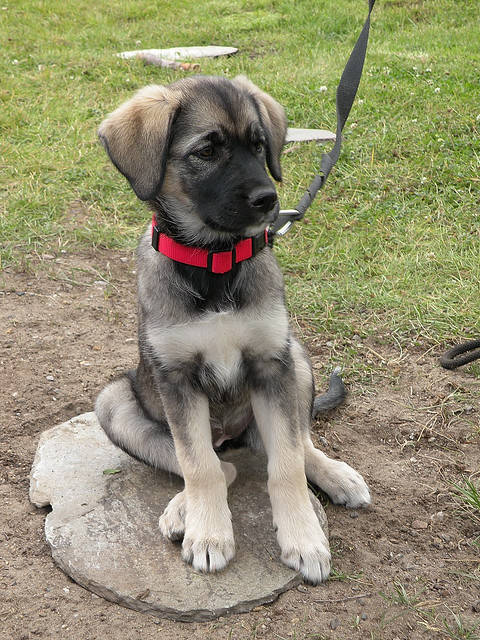