My oldest got to choose a ball of sock yarn and I picked the pattern.
The yarn and the pattern turned out to be a perfect match :)
This is the 5th pair I've knitted with this pattern, but I still haven't made one for myself...
So I guess I'll have to cast on a pair soon. Just need to find the perfect yarn ;)

Myrhatt or Marsh Cinquefoil likes wet, boggy places, fens and peaty meadows.
When it is in flower, it is a good source of food for nectar-loving insects such as bees and hoverflies.

Cloudberry Picking & Knitting in the Forest

Knitting in the forest and cloudberry picking makes a great day :)
The sock pattern is Business Casual. 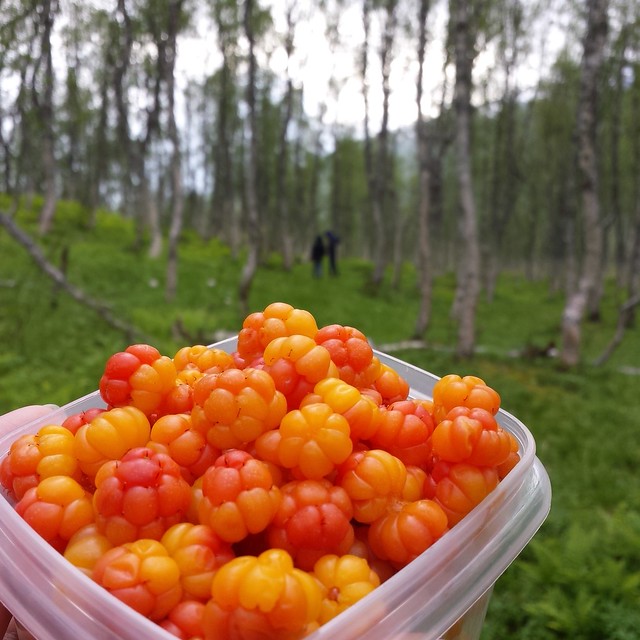 I've been a fan of General Hogbuffer's pattern since I found them on Ravelry. So when I saw that he was going to have a mystery kal, I just had to join the fun :) Here they are and I love them!
I have only knitted one of his patterns before - Stripe Tease, which also was a fun knit. I do have a few of his pattern in my queue, so I'm sure I'll cast one a pair of Squircle very soon.

Taking a picture of oneself wearing a hat is difficult - just saying... I think these two photos was the best out of ca. 15 photos... Anyway, I have knitted my first sockhead hat. I've seen it around a lot, but never thought it was something I would cast on and knit until I found a skein of yarn in my stash that didn't look good in any of the patterns I tried. I saw that it would stripe, so I decided to give the Sockhead pattern a try. I'm not sure that this will be one of my favorite hats..., but it's snug and warm and I know it will heep my head and ears warm ;) And who knows, maybe I will cast on a second one for one of the kids..

Ravelry project page
Pattern: Sockhead Hat (free pattern)
Yarn: 74 g Safari Sock Yarn #Weathered Cog - The colours are best shown on the photo below.
Needles: 3 mm / US 2,5
Made for: Me

And althoug there haven't been a lot of knitting so far this summer - a pair of socks for Hubby has left the needles. They are knitted in the same yarn as the Yellow Stripes socks I made earlier this year.