It's Monday - What Are You Reading #1

It’s Monday! What Are You Reading? is a meme hosted by Book Journey.
Each week we spotlight the books we are reading, planning on reading or just finished reading. 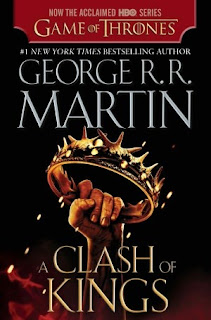 The second series of Game of Thrones has been on tv here in Norway in the latest weeks. But I have told Hubby to change channel when he stops to watch. I have to read the book first, I keep telling him. And then we can stream it and watch as many episodes as we want.
So this weekend I went and grabbed it from the shelf and started reading it.
And George R.R. Martin does not dissapoint!
So now I just need to hurry through over 900 pages so we can start watching :) And then I'll start the 3rd book - A Storm of Swords,  so I'm ready to start watching the 3rd season as well ;)

"A comet the color of blood and flame cuts across the sky. And from the ancient citadel of Dragonstone to the forbidding shores of Winterfell, chaos reigns. Six factions struggle for control of a divided land and the Iron Throne of the Seven Kingdoms, preparing to stake their claims through tempest, turmoil, and war. It is a tale in which brother plots against brother and the dead rise to walk in the night. Here a princess masquerades as an orphan boy; a knight of the mind prepares a poison for a treacherous sorceress; and wild men descend from the Mountains of the Moon to ravage the countryside. Against a backdrop of incest and fratricide, alchemy and murder, victory may go to the men and women possessed of the coldest steel . . . and the coldest hearts. For when kings clash, the whole land trembles." 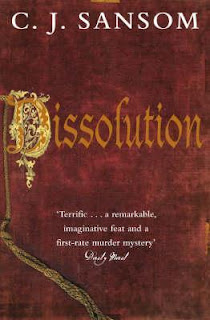 I am also reading a few chapters now and then in Dissolution (Matthew Shardlake #1) by C.J. Sansom.  Love this kind of historical mystery!

"It is the winter of 1537, and England is divided into those faithful to the Catholic Church and those loyal to the king and the newly established Church of England. Thomas Cromwell, Henry VIII's feared vicar general, crusades against the old Church with savage new laws, rigged trials, and a vast network of informers. Queen Anne Boleyn has been beheaded and the monasteries are being dissolved - their treasures pillaged and their lands eyed greedily by courtiers and country gentry. But having put down one people's rebellion, Cromwell is afraid another might topple the realm. So when one of his commissioners is murdered in the monastery at Scarnsea on the south coast of England, he enlists his fellow reformer, Matthew Shardlake, a lawyer renowned as "the sharpest hunchback in the courts of England," to head the inquiry." When Shardlake and his young clerk and protege, Mark Poer, arrive at Scarnsea, the two uncover evidence of sexual misconduct, embezzlement, and treason. And when two other murders are revealed, Shardlake must act quickly to prevent the killer from murdering again." 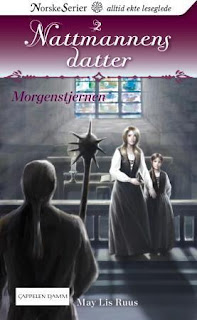 This is a norwegian series - Nattmannens datter (The Nightman's daughter) set in Bergen in 1701. I am reading book #2 and so far there are 9 books and more is coming.
Lucie is an orphan and lives on Children and Discipline House in Bergen. One night she and her friend Karen Malene sneaks out. Their goal is a landfill at little Lungegårdsvann, where they will look for a gift for little Tilly who has a birthday. Instead they make a gruesome discovery, which follows them for a long time.

The Night Man is the one who keeps the streets clean and empty the kegs. He buries killers, suicides and unbaptized children, and he assists the executioner with executions. He is unclean and dishonorable, an outcast that no one will have anything to do with. When he shows up at the Manufactory, Lucie recalls his father, who abandoned her when she was little.

Email ThisBlogThis!Share to TwitterShare to FacebookShare to Pinterest
Labels: Books, It's Monday - What Are You Reading

♥ Thanks for leaving your comments ♥